Back home, back to my secure network, and back to being able to post from Ecto.

Still a bit up in the air on which desktop blog editor I ought to buy.

Well, one advantage of coming home with a brand-new hard drive in the MacBook is that I can download both apps and start my free trial periods all over again. Yes, that’s me: Andy Ihnatko, enemy of independent developers everywhere.

Still slightly amazed that a tool as venerable and sophisticated as WordPress doesn’t do secure authentications, which forced me to blog via Flickr for the whole week. It’s times like these that I truly value my self-image as an idiot. There are areas in which I’m such an expert that I’m entitled to a bit of ego and arrogance (The Thing could so beat The Hulk in zero-gravity! Shut up!!!) but in general, it’s better to ask around rather than trust that what you think is true is actually true. Well, I’ll put a third tickmark next to the “get some sort of VPN solution going for my home network” item on my To-Do list.

Being home again is also my cue to restore the contents of the drive that failed last week. But I’m not in a big rush. It’s actually kind of neat to start all over again with an empty Mac. Many’s been the time when I’ve taken a look around my home and office and thought “You know, I have some money in the bank; why don’t I just rent a second, clean apartment to live in…just until I get ahead on my deadlines, I mean?”

Every now and then, I get to do precisely that. I miss my hotel room already. True, after a week at a major trade show it had acquired a certain dignified amount of clutter, but even at its very worst, you could still see the majority of the carpet. It had a tub that was large enough for myself and two friends. And a nice lady came in every single day to give me fresh towels.

Oh, I also learned a powerful life lesson yesterday when I got back from the airport: 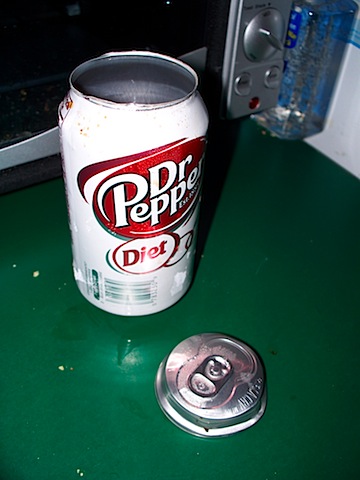 It turns out that if you leave a 12-pack of sodas on the front porch and the temps plummet below freezing, the sumbitches will explode. Hunh. Go figure.