Well, Twitter is a genius app. Genius! That’s the only word for it.

Twitter is a microblogging platform. This thing you’re reading right now works just dandy for publishing vast acregaes of doggerel that incorporate graphics, sound, and video. Twitter is designed for little 140-character blurblets. That’s text-messaging length. It’s long enough to communicate a single, efficient thought or idea, but only just. You subscribe to other users’ Twitter feeds and it’s all aggregated together on your custom page on Twitter.com.

I thought it was a pretty dumb idea when I first tried it. And I was certainly right. If you don’t have a whole bunch of friends who happen to be using the service, then Twitter takes a hobby that’s already pretty pointless and adds Annoying to the mix.

But I tried it again about a year later. By then, lots of my pals had joined up. Lots and lots of them.

Oh, and Twitter has released an open API to their service, allowing anybody to write custom apps and widgets for receiving Tweets. There are new tools that are way better integrated into your life than a page on Twitter.com. Regardez “Twitterific,” a megaspiffy Twitter notification app from the good gremlins at Iconfactory: 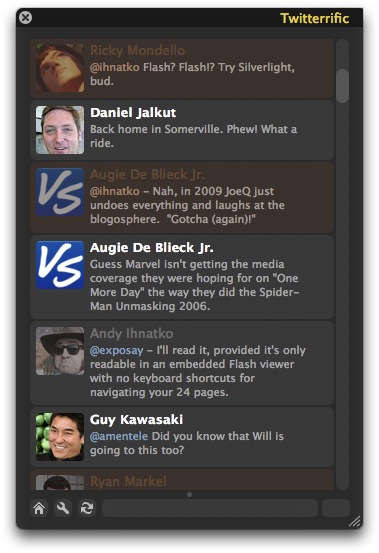 Every time someone you’re following posts a new Tweet, an annoying tweety-bird sound erupts from your speakers (no sweat, you can turn that off in prefs) and the Twitterific window floats into view. And when you’re consumed by the need to tell everyone that your burps have been tasting like pencil erasers all morning, you can just click in the little text box at the bottom and presto…suddenly, it’s the world’s business.

Twitterific even locates “replies” to your Tweets and colors ’em for your attention.

But that’s not my point. My point is that Twitter is brilliant at anticipating and dealing with user complaints. Witness a recent state of affairs: 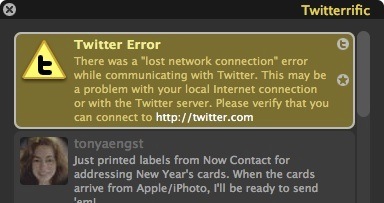 Alas, this has been happening all too frequently. Twitter is the poster child for Reason One why doing business on the Internet is by no means a straightforward, linear proposition.

Call it the “Springtime For Hitler” Syndrome: your product can become so successful so fast that it ruins you. You attract so many users that your servers can’t handle the load. Meanwhile, your company is young enough that you don’t yet have the cash or the credit line to upgrade those three Commodore 64’s you’ve got in your server room.

Result: frequent outages, skyrocketing expenses, and a big opportunity for anybody who has been observing your company’s meteoric rise and calculating just how little money it would take to do exactly what you’re doing, only with better hosting.

Normally, a series of regular, Soviet Union-style outages would be a death warrant. But it’s different with Twitter. Stop for a moment and think this through.

Do you have the answer?

Yes: the folks behind Twitter have obviously realized that when the service is down, its users don’t have access to the megaphone that they’d normally use to tell the world things like “****ing Twitter! It’s down again! Cripes, if only there were something just as good that I could immediately switch to!” So the pressure’s off.

One or two “for the record”s: there are indeed some microblogging alternatives, led by Jaiku. But Jaiku takes something simple and straightforward and pretty and makes it complicated and ugly, like when sex with a co-worker in a supply room during the office Christmas party turns into a real relationship.

And although I find Twitter’s frequent outages to be pretty damned annoying, they’re not so frequent that I’m tempted to give up.

10 thoughts on “Twitter: It’s the most brilliant and cunning Web 2.0 app ever!”