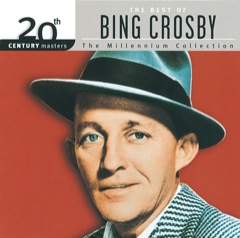 Blah, Blah, Blah: Not much to this song, is there?

It’s charming, it’s been flashed into the cultural NVRAM, and even if we wanted to kill it, “White Christmas” has corrosive acid for blood so taking it out once and for all would probably create more problems than it solved. That said, if Irving Berlin hadn’t written “White Christmas” I’m fairly sure that it would have been written eventually. Possibly by a kid poking listlessly at a Casio keyboard in a midwestern Wal*Mart.

Also problematic: it reminds me that we live in an imperfect world.

In a perfect world, “Holiday Inn” would have become a familiar and cherished holiday TV staple. Lots of nice songs and it features both Bing Crosby and Fred Astaire. Instead, the best song from that musical inspired a musical of its own: “White Christmas,” which is probably one of the most baffling “classic” movies in my personal database.

The thing makes no sense. Which normally isn’t a problem, but I’m telling you that it makes no sense even compared with other musicals. The last time I sat on my sofa and watched a plot that was this random, with characters who were this poorly-motivated and brought to life this poorly, I had a game controller in my hands.

The chunk of road salt that acts as the cherry on this sundae of beach mud is the fact that it’s probably the ugliest musical ever made, outside of the Iron Curtain. There are too many examples to count — plus, c’mon man, it’s Christmas; don’t make me think about such things — but I’ll single out the desperately monochromatic art direction. This is probably the only movie shot in color that needs digital colorization.

Seriously. The next time it comes on, pay close attention to the color palette. It’s as though the guy who designed the sets did it during breakfast at Denny’s, and he decided to just use the four-pack of crayons that they give kids to color with.

There’s a (really dumb) reason why, though: “White Christmas” doesn’t just recycle one of the best songs of “Holiday Inn”…it also re-uses the same sets. And that movie was shot in black-and-white which means: gray walls, white trim, black floors…the whole movie’s a singing, dancing monument to Prozac.

I will wind up this conversation about “White Christmas” by mentioning that Vera Allen (the Haynes Sister who is not Rosemary Clooney) is painful to watch. In 1948’s “Words And Music,” she was a vivacious blonde Betty Page, dancing “Slaughter On 10th Avenue” with Gene Kelly. By 1954, she was battling anorexia. In fact, the disorder was taking such a visible toll that her entire wardrobe had to be designed with extremely high collars, to cover up her neck.

Why I Bought It In The First Place: Another one of those deals where I bought it for the Advent Calendar and wound up listening to it a lot. Don’t just trust the mall sound system to deliver your holiday classics, friends.