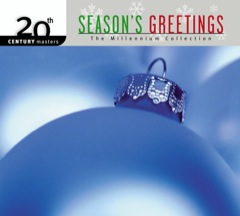 Have Yourself a Merry Little Christmas

“Have Yourself A Merry Little Christmas” is a Christmas recording. It’s sung by Judy Garland. No negotiation on that point. It’s not as though the alternatives are bad. Great gravy, iTunes can sell you versions recorded by Sinatra, Bennett, and Ella Fitzgerald.

No matter who the singer is and no matter how well the they sing the song, though, your brain still substitutes the Judy Garland vocals for whatever you’re actually hearing.

(All right: with Ella Fitzgerald, maybe you hear it as a duet.)

Why I Bought It In The First Place: Bought it for the Advent Calendar. There seems to be very little need to actually buy a track like this. If you can spur yourself to leave the house a few times between Thanksgiving and Christmas Eve, you’ll hear it plenty of times.

But when it’s in your library and you finally get a chance to listen to it at your own pace and on your own terms, you stop taking it for granted.

Sample “Have Yourself a Merry Little Christmas”
on the iTunes Store