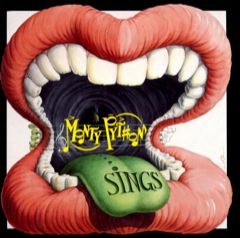 Eric the Half a Bee

Both men had plenty of reason to just coast on through the rest of their careers. You’re certain that your place in history is assured; why knock yourself out? But both men are true artists; junkies for excellence in artistic expression, they live their lives craving their next fix.

Olivier went on to star in a disastrously comical remake of “The Jazz Singer” which was designed as a vehicle for Neil Diamond’s career as a dramatic actor. Cleese, knowing that it’s best to give the pubic what it wants, reprised the Praline role in “The Fish License Sketch” just a year later.

Thus, John Cleese is a much better actor than Sir Laurence Olivier.

And The Fish License Sketch spawned this song from Monty Python’s Previous Record. So we can safely say that Cleese is a much, much better actor than Larry, particularly if we meanspiritedly overlook the rest of the films in Olivier’s Shakespearian cycle and bring up “Clash Of The Titans” instead.

(The sketch in question:)

I wish more songs like this were being made. It’s pure silliness. When the composer finished writing it and sent it to the studio, I’m sure he hoped that it would do well but he was probably pretty sure that it wouldn’t become a great boon to Humanity. I mean, Dylan’s “Like A Rolling Stone” empowered an entire generation. McCartney’s “Hey Jude” continues to offer courage and hope to hundreds of thousands of people. Even Billy Ray Cyrus’ “Achy-Breaky Heart” induced a certain demographic to spend millions of dollars on CDs and concert tickets instead using the money to get hooked on meth.

“Eric The Half A Bee” won’t help its composer win a a Nobel Prize or get into Heaven or anything. All this song did was give me a reason to hum cheerfully while doing something exceptionally tedious…but hey, that’ll do.

Why I Bought It In The First Place: The best endorsement you can make for a certain song is to keep buying more copies of it over the years. I’m pretty sure I bought Monty Python’s Previous Record secondhand on LP, and then I got this track on CD as part of the Monty Python Sings compilation, and then I bought this specific track from iTunes because I really, really wanted it on my iPod and I couldn’t find the CD.

Sample “Eric the Half a Bee”
on the iTunes Store