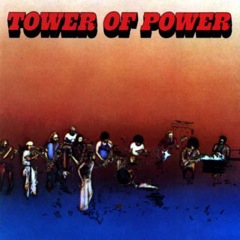 Blah, Blah, Blah: The Tower of Power was founded by horn players. So in philosophy at least, it’s more or less a horn section with enough of a support system around it to allow it to move independently, like a four-poster bed with a four-cylinder engine and a set of golf cart wheels underneath it. The formed at the beginning of that ten-year period when it was mathematically impossible for a band to attain desired levels of funkiness without a horn section. Guitars? Pfft. Those were rhythm instruments. The real driving force was the 320 pounds of brass over at the left of the stage. Admittedly, it was good to have a bass player in there as well but really, you bought yourself a bassist with the money you had left over after you’d paid for the brass players and whatever quantities of metal polish they required for the tour.

I do love a good horn section. I saw the Brian Setzer Orchestra once and immediately admired the horn section’s work ethic. In a band like that, musicians are blessed with free time. The guitarist is showboating at center stage, you’ve got something like eight measures before you need to jump back in…it’s not enough time to send a few text messages, but it does give you a chance to rest your trumpet on your knee and think about whether you’re going to order the tuna salad or the chicken club from room service later tonight.

But that’s not what Brian Setzer horn section did. There’s this little thing called showmanship, sir. Eight measures with no notes to play is eight measures during which you can be spinning the instrument, and pumping it in all four compass directions one at a time, and turning 90 degrees in your seat while feigning disinterest so that you can just sort of blink back into position a split-second before you need to start playing again. This was a horn section who committed to the philosophy “People paid to get in; hell, we might as well entertain ’em.”

As for the song itself: try not to listen to it in public. It’s impossible to listen to “What Is Hip?” without moving in a funky sort of fashion, and if you’re unlucky enough to be in plain view of Mean Girls, it won’t be pretty.

Why I Bought It In The First Place: Some gain Wisdom through quiet contemplation and meditation. Some simply wake up from a three-month coma and clearly understand that a camcorder, a YouTube account, a shopping cart, and a cylinder of compressed air are perfectly safe individually but often a recipe for disaster when they’re combined in a parking lot that empties into a two-lane state highway.

But Wisdom is Wisdom, regardless of the path you walked (or rocketed, screaming) to get there. On that basis, I suppose I shouldn’t be sheepish about saying that (yes) I first heard “What Is Hip?” when it was used as one of the annual dance videos on “The Drew Carey Show”:

I have so much respect for that show. This was an expensive 3 minutes to produce (three minutes that had absolutely nothing to do with the actual episode, remember) and God only knows how long the regular cast of non-dancers had to rehearse for each one of these things. It would have been much simpler to just shoot three pages of script. Yet they did the dance number anyway.

There are ways to tell when the folks who make a TV show or a movie love what they do for a living. One big tipoff: they do stuff like this every now and again.

Sample “What Is Hip?”
on the iTunes Store