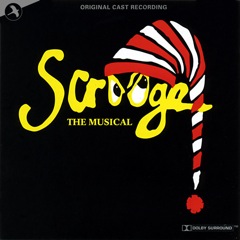 Thank You Very Much

Blah, Blah, Blah: I guess it’s a good idea to work a few actual Christmas-ey sort of tracks into this thing. I also guess that “Thank You Very Much” counts…even though gas-chromatograph testing reveals that it contains mere trace elements of Yule and Yule by-products. Merely secondhand smoke, I assure you: people file it in the “Christmas” bin only because it’s from the “Ghost of Christmas Yet to Come” segment of the 1970 musical adaptation of “A Christmas Carol.”

It’s a charming, peppy number, though I’ve always meant to ask one of my English friends how they feel about music like this. “We’re not all a bunch of charming, singing Cockneys, you know!” he’ll probably insist. And then he’ll pick up a nearby broom, tip his soot-stained hat, and dance away down a cobblestone road in a skipping, high-stepping fashion.

Music aside, it expresses a nice sentiment: it’s a celebration of the spirit of human generosity and of one’s gratitude for that generosity. If you’ve seen the movie, you have plenty of reasons to listen closely to try to detect some sort of shading or double-meaning in the lyrics but nope: there’s absolutely nothing dark or ironic about the song. In fact, it’s such a positive piece of music that you often hear it in commercials.

So it’s sort of funny that in the movie, a huge crowd of people sing it in jubilant celebration of the fact that a man whom everybody utterly despised is finally dead, dead, dead, and probably burning in Hell already.

Ten points out of ten to the G of CYtC. You can’t really accuse the Ghost of not making a powerful statement through this precious glimpse into Scrooge’s future. I mean, there’s a dude literally dancing on the coffin, surrounded by hundreds of folks whose only source of sadness is the fact that the casket isn’t big enough to accommodate moonwalking.

It’s hard to put a positive spin on a sight like that. It truly provokes one to think hard about the choices that one has made in one’s life. This was way better than putting together a PowerPoint presentation.

Speaking of life choices, this song has always been an important element of one of the Things I’d Do If I Ever Had So Much Damned Money That There Was Absolutely No Point In Being The Least Bit Careful About How I Spent It. I would bankroll a huge, annual Macy’s-style “Thank You Very Much” Parade.

Not a Thanksgiving parade. There’d be nothing for anybody to cook or buy. It wouldn’t be tied to an existing holiday…it’d be a parade to celebrate the simple concept of Gratitude. “We all have things in life that we’re grateful for, whether they’re individual people, institutions, or even abstract concepts,” the announcement would read. “The purpose of this parade is to celebrate how grateful we are for whatever happiness we’ve managed to secure in life.”

I would screen all parade participants carefully. I would insist on no negativity and no politics. If you want to do a float that expresses your gratitude for the beauty of Nature, great. But no people with bullhorns complaining about inadequate pollution laws. No snarky banners thanking the Eagle Bond Paper Company for making all of the fish in a nearby lake float to the surface, thus making them a lot easier to catch.

Not even any pamphlets on recycling. This parade is just about the things you’re thankful for…and nothing else.

But for all that, the final float would be the same, year after year. A marching band would be in two lines on either side of it, playing “Thank You Very Much” over and over again. The float would be a black, slightly oddly-shaped stage with smiling Cockneys dancing gleefully on top of it nonstop. A section of the stage would be a hidden trampoline, so the dancers could get some serious air.

(Obviously, we’d have six identically-dressed Cockneys rotating through over the course of the event, so that the stage always has someone up on there dancing at max energy level without worrying about heatstroke or something.)

From certain angles, the stage would look somewhat like a coffin. No comment. And above the coffin — the stage, sorry — would read the following words, in giant, colorful letters made from rose petals:

EVEN THE MOST WICKED OF MEN
DOES AT LEAST ONE THING IN HIS LIFE
FOR WHICH WE SHOULD ALL BE GRATEFUL.

The “Thank You Very Much” parade would take place on the same Sunday every year. I suppose after the fourth or fifth one, someone would figure out that it happens to be the Sunday closest to the anniversary of the death of Fred Phelps.

Why I Bought It In The First Place: I think it was used in some damned commercial or other and I wound up humming it so much that I wanted to own the thing. I refuse to discuss how many of my iTunes Store purchases begin with a tracking shot of a sports-utility vehicle arrowing across a desert blacktop.

Sample “Thank You Very Much”
on the iTunes Store