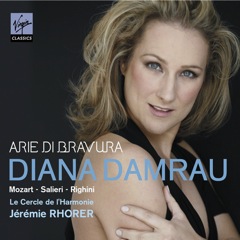 Blah, Blah, Blah: When Evel Knievel was scheduled to jump 14 school buses on his motorcycle at a football stadium, I’m certain that there were a lot of people who paid $7 hoping to see him do just that. But there were probably just as many who came hoping that he’d only manage to jump 13 1/2, if you get my drift.

And so we have Der Hölle Rache kocht in meinem Herzen, the Queen of the Night’s infamous second aria from Mozart’s “The Magic Flute.” The title translates to English as “The Vengeance of Hell Boils In My Heart.” When you hear this song aria well, you can understand the meaning. The soprano singing it was probably channeling the Q of the N’s feelings on a profound and sympathetic level. Except she’s targeting her furies not at Sarastro, the Queen’s sworn enemy, but at Mozart, the evil bastard who wrote an aria that features not one but four F6’s and a range wide enough to graze 5,000 head of cattle on.

The F6 is at the extreme top of what a coloratura soprano can unreasonably be expected to sing. Hitting an F6 is quite comparable to throwing a 100 MPH fastball. People who can do it at all are rare, but that isn’t enough: they also have to be able to do it with precision and control, and do it repeatedly. It’s such a technically-demanding piece that sopranos typically don’t even study the role until they’ve fully matured as professionals.

I once heard or read an interview with a soprano who was making a terrific living in the Queen Of The Night business. I desperately wish I could remember where I saw it because it was terrific stuff.

“A soprano really doesn’t want to get a reputation as a great Queen of the Night,” she said (I’m paraphrasing of course). “It’s such a rare specialty that you’ll always be getting work, and always at premium pay, so it’s almost impossible to not spend a few years playing no other roles. Meanwhile, you must protect your voice because if you sing this with improper technique, or when you’re already a little bit sore, you can eventually wind up with a career-shortening injury.

“And I can expect to miss at least four or five of the aria’s trickier notes even on a good night. I guarantee you that every time I miss one, three dozen opera nerds in the audience are making a smug little tickmarks on their programs and congratulating themselves for being better at listening to this aria than I apparently am at singing it. It’s practically the only reason why they came to see the opera; it’s easy to let that sort of thing get you down. All this risk and all that trouble, all for what is actually a pretty small part. Apart from the two arias, the Queen s practically invisible.”

So yeah…there’s a great deal of expectation in the audience. The performer is attempting something that’s practically impossible. She has to serve the technical demands of the piece as well as sing the aria with power and conviction. She’s not rooted comfortably in front of a studio microphone, either: she has to act, too.

If she pulls it off, it’s something quite spectacular. If she crashes…okay, that’s pretty cool, too.

You sympathize with the singer but you also get pretty greedy as a listener. Maybe you’re not ticking off the F6’s — incidentally, I only know what an F6 is because it’s “that wicked high note in the ‘Queen Of The Night’ aria” — but when you take advantage of the iTunes Store and YouTube to sample lots of different recordings, it’s easy to pick out the great ones over the merely adequate ones. In the great ones, notes are spot-on instead of “close enough.” Complicated runs of notes are crisp and precise instead of being mushed together into a single apologetic compromise note.

Best of all, you hear a performance propelled by fire and confidence, not by a singer’s desperate prayer to please please please get through it without screwing up too badly.

My favorite rendition of Der Hölle Rache kocht in meinem Herzen available via iTunes used to be an EMI recording sung by Lucia Popp. But in the midst of grabbing the track’s iTS link tonight I discovered that (hot damn!) Diana Damrau has finally released a CD…it hit iTunes just a month ago. Damrau is one of the top coloraturas in the biz and she’s reknowned as a true go-to Queen Of The Night. Last year I saw a DVD of a 2003 Royal Opera House production of “The Magic Flute” starring Ms. Damrau and I spent the whole rest of the day writing “Mr. and Mrs. Andy and Diana Ihnatko” on the cover of my Algebra notebook over and over again.

Here’s what you ought to do. Buy the iTunes track and give it a listen. Then, watch her performance at the Royal Opera House on YouTube. You’ll be doubly impressed once you see just how full her plate is while she’s trying to negotiate Mozart’s minefield.

Some background, before you watch the video. You should be able to pick out the Queen Of The Night easily enough. The dame in the nightgown is her daughter, Pamina, who’s been kidnapped (or liberated; it’s tricky) by Sarastro, Sun Priest of the Temple of Wisdom. In Mozart’s day, I’m sure that Sarastro’s actions were seen as noble and logical, but in our day, this business of “you’re a woman, so you’re way too emotional and irrational to raise your daughter without male guidance” makes him into the heavy and makes the Queen into a far more sympathetic character.

Oh, and before he died, the King gave his most powerful artifacts to Sarastro. He explained it real nice to his wife: “You’re a woman! I mean…come onnn!” Thus powerless against the Sun Temple, the Queen has sent a Handsome Young Prince (who apparently wandered in from an adjoining opera) to handle the rescue. She’s promised him Pamina’s hand in marriage (he’s fallen madly in love with the girl’s portrait) along with a magic flute.

Ah. But he’s been charmed by Sarastro into joining his order. Pamina is madly in love with the prince and she seems just as happy to stay.

The Queen (and her ladies-in-waiting) appear in the Temple to see how the rescue is going, and they find out that whoops, she’s been betrayed by just about everybody. This is real Last Straw sort of stuff. She gives Pamina a dagger and orders her to kill Sarastro, so that the Queen can reclaim her objects of power (and, incidentally, get her daughter out of the Temple).

Suffice to say that the Queen has truly had enough, and she promises Pamina that if she fails to do as she’s told, the Queen vows by all that is holy and inholy that she’ll disown and destroy yer.

I mean, cripes…imagine how pissed off the Queen would be if she found out that Pamina wanted to stay in the Temple and that she got a butterfly tattooed on her buttcheek during Spring Break last year…

Why I Bought It In The First Place: Simple: An hour ago, I learned that it existed.