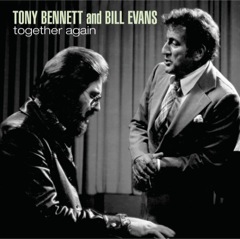 You Must Believe In Spring

Blah, Blah, Blah: You’d like to think that there’s absolutely no limits on human achievement. But when you look at the two albums that these two jazz legends recorded together, it’s easy to conclude that nope…that really was as good as any record will ever get. They’re the product of a certain era that ended twenty years ago or more.

You start off with an appreciation for how hard it is to build a Tony Bennett or a Bill Evans in the first place. Tony Bennett has been a vocalist for sixty years; he’s spent the past fifteen or twenty of those as the undisputed Dean of American Jazz Singers. A career like that will never happen again. If a singer becomes a star, he’s got about eight good years in him before he’s either unemployable or so rich that he’d rather put down the microphone and pick up a game controller instead. And the “middle class” doesn’t seem to exist any more. You can’t toil for years making an honest living and honing your craft. You can stick out for five years at best before you have to throw in the towel and take a job at your uncle’s worm farm.

There are jazzmen as talented as Bill Evans, but they just don’t reach the same level of power and prominence these days.

But…okay. Let’s culture one more specimen of each in a lab. You get an “A” for effort (as well as for having the guts to tamper in God’s domain) but there’s still no chance that this Chad Bennett and Troy Evans will get a chance to take part in such a longstanding and fruitful collaboration. Maybe Chad will do one track on Troy’s next CD and vice-versa but honestly…why would either artist’s management approve such a deal? Troy can work just as hard on his own album without having to split the proceeds.

No, if they ever did a whole album, it’d only be after both of ’em were way past their prime and unable to sell a CD or a tour under their own steam.

So cherish these two albums. It features two brilliant artists at the peak of their powers and their talents fit together perfectly. It’s just Bennett’s voice and Evans’ piano. No big bands or studio hocus-pocus. Not necessary!

This track in particular is amazingly powerful. “You Must Believe In Spring” bumps the toggle switch on your melancholy. If your heart is broken, this song will mend it. It’ll immediately restore your hope for a brighter day and your faith that one day, love shall indeed return to your life.

…but if you’ve already gotten over her (or him), this song will break your heart alllll over again. Even if it ended, like, ten freakin’ years ago.

Still, it’s well worth the emotional risk. If you listen to it twice in a row — and you’ll want to — you’ll find yourself right back where you started, heartbrokenness-wise. So no harm done, really, so long as you stick to even numbers.

Why I Bought It In The First Place: It’s Tony Bennett, for God’s sake. My first Tony Bennett album was “The Art Of Excellence,” which I bought on cassette in high school. I’ve no idea why I bought it. I think I was in one of those “I refuse to leave this store without buying an album” moods. The cover caught my eye and I was a little curious about what a whole album by the “I Left My Heart In San Francisco” guy would sound like.

The moral of the story: when you’re in the mood to buy something, go with Tony Bennett. He’s always the right answer.

Sample “You Must Believe In Spring”
on the iTunes Store