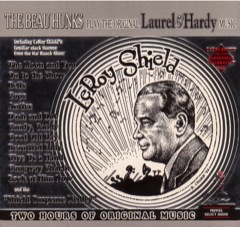 Smile When the Raindrops Fall

Blah, Blah, Blah: The world is a far, far more beautiful and colorful place thanks to the presence of people with magnificently daffy obsessions.

Case in point the Beau Hunks. This group of musicians has taken it as their solemn goal to recreate the soundtracks of the classic Laurel & Hardy comedies as precisely and accurately as possible. They reproduce the charts precisely, note for note. They fill the orchestra with precisely the same roster of instruments that are present on the soundtrack. The musicians? Masters at period performance. The clarinetist not only shows up with an instrument that’s vintage to the era…but he cut his reed in precisely the same way that a clarinetist would have in 1929.

The only itchy part of this whole thing for me is the fact that this sort of obsession also extended to the recording. Thankfully, they didn’t choose to record this in mono acetate. But instead of recording in a modern, conventional way, all of the performers were arranged in a circle around a single cluster of microphones. Because, you know, that’s pretty much how they would have recorded those musicians in a 1930 studio.

(See, worst-case is that you wind up with something like “Grindhouse,” which attempts to mimic the experience of 1970’s grindhouse cinema down to the scratches, splices and missing reels…ignorant of the fact that if the makers of those movies had been able to present pristine copies of their films in glorious surround sound, they certainly would have done precisely that.)

But these Beau Hunks tracks are fab. They were right; somehow, this sounds like a perfect reproduction of what was created by the original orchestra, if the master recording had been perfect to begin with. It’s completely appropriate.

Technical bits aside, it’s a lovely tune. Music has this wonderful power to influence your mood and perceptions. When this track comes up in Shuffle Play, for those few minutes I’m walking like Oliver Hardy and holding the light end of a long stepladder, brimming with misplaced confidence about my ability to hoist a piano into a third-floor window and wondering why my partner is waiting for me at the front door when he was holding the other end of the ladder when last I saw him.

Why I Bought It In The First Place: One of those impulse things. I read an article about the Beau Hunks online and was so curious that I had to invest 99 cents.

Sample “Smile When the Raindrops Fall”
via the iTunes Store