It’s the start of the holiday season. This means that I can’t go to the pharmacy to buy Q-Tips without being assaulted by generic holiday tunes like “It’s The Most Wonderful Time Of The Year.”

I have a theory about this song in particular: I think it was written by a really intense evangelical Christian.

“Because how wonderful it is indeed, to have a whole season celebrating the birth of our Lord and Redeemer, Jesus Christ,” he told the producers of the Andy Williams Christmas Special, explaining his inspiration for the piece.

“Yuppers,” they replied. “But we’re going to need you to lose the Messiah angle. It’s a bummer.”

There was a moment of silence.

“So was dying horribly on the cross to atone for Mankind’s sins,” the composer said, finally.

“Maybe. But this comes straight from the sponsor. Proctor & Gamble are using the special to roll out a new brand of dishwashing liquid called ‘Clarity,’ marketed specifically for atheists. So from now on, all references to Christmas have gotta go.”

The composer was a Christian, but he was also a realist. And he’s promised the family one of those fancy new widescreen 21″ color TVs. So he grit his teeth, wrote new lyrics, and then set about to write the final arrangement.

But he was still seething with hostility over all of this, and it subconsciously leaked through. Which is why the orchestrations are so loud and concussive that three bars in, you automatically reach into your pocket and hand over your lunch money to make it stop.

This also happens to be the season when companies try very, very hard to get me to read their press releases about holiday gift ideas. Viz, this offering from Microsoft: 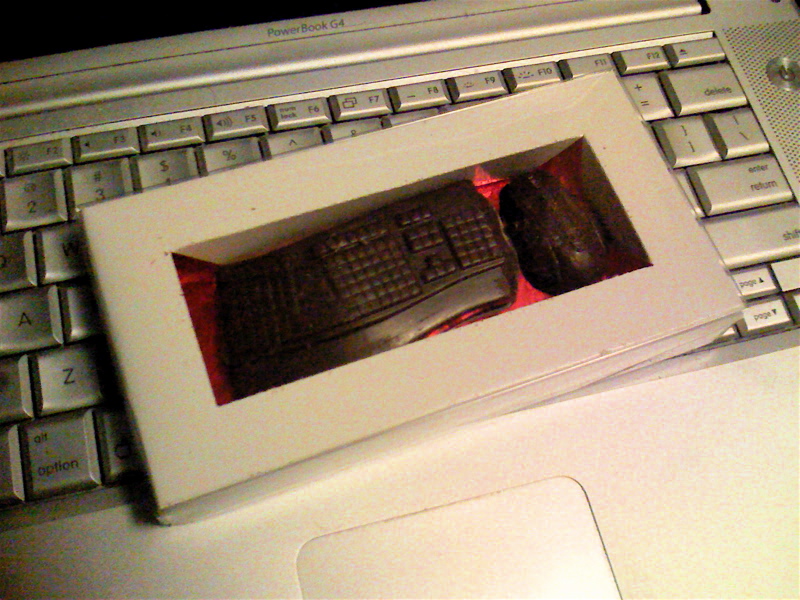 Yes, it’s a chocolate edition of their ergonomic keyboard and mouse. I assure you that my journalistic integrity is the covenant that binds me to my readers. I cannot be influenced by petty graft.

Still, I ate the chocolate.

Of course, the king of confection-based PR is still IBM. A few years ago, they wanted to get the message out that their latest ThinkPad was significantly lighter than its predecessor. So they commissioned chocolate ThinkPads that weighed exactly as much as the difference:

(A little less than a pound, if you’re wondering.)