An edited version of this column was first published in The Chicago Sun-Times on October 4, 2007.

How tragic. What was once thought of as America’s sweetheart of the cellphone industry, a fresh, charming piece of technology with a bright and exciting future, is starting to become more famous for making headline-grabbing stumbles and sprawls.

Horrifuingly, iPhone has become the Lindsay Lohan of technology.

I blame the iPhone’s management, of course.

And the latest flap has been the worst one of them all. Apple released a major update to the iPhone’s firmware last week. Firmware 1.1.1 adds an iTunes Store application as well as some security fixes and minor user-interface tweaks. And if you’ve used a tool to unlock your iPhone so you could use it on T-Mobile and other outside phone networks, it will probably render the phone inoperable and maybe even unrecoverable.

Yes, it’s that last thing that’s grabbing the headlines. And not just in the nerd press, either. “Apple disables users’ iPhones,” I heard on the local nightly newscast. “and the company says they won’t fix them!”

As for the nerd press…they’re reacting the way a cat does when it’s taken a nap in your clean laundry and suddenly finds itself tumbling around in the dryer. Suffice to say that they are not calm and measured. Even folks on highly-partisan Mac sites are accusing Apple of intentionally breaking those unlocked phones out of pure spite.

Well, that’s just rubbish. I’m almost willing to dismiss that idea purely on a humanist level but in addition to my basic faith in humanity there’s the fact that unlike other phones, SIM-unlocking an iPhone is a very messy trick. They’re hacks, not consumer solutions, and the risks are severe and unavoidable. It’s not like riding in an airplane…it’s like jumping out of one.

Apple couldn’t have protected these phones without a great deal of time and effort that was better spent improving the iPhone itself. And they did warn the iPhone community about the dangers of SIM-unlocking. They did it when these tools first became available and they even inserted a big warning — in capital letters, no less — in the firmware installer itself. What we have here isn’t a case of Apple being evil: It’s a demonstration of what can happen when hacker tools are sold as consumer solutions.

Folks still have a right to be very upset at Apple, though. The update trashed some phones that hadn’t been modified at all, its users claim. Worse…it removes all unauthorized third-party applications and makes it impossible for them to ever run again.

And this hits me right where it hurts. I count on my iPhone eBook reader to keep info and documents from my desktop at hand. Plus, I’ve finally gotten to the point in “The Hitch-Hiker’s Guide To The Galaxy” text adventure where I need to get the Babel Fish.

It’s amazing that the iPhone developer community has come so far without any help whatsoever from Apple. The company released no sample code, no tech docs, no software development kit. But the iPhone is based on a popular OS, and Unix programmers took the ball and ran with it. By September, there was a friendly, consumer-level app that downloaded, installed and ran commercial-quality software.

It was such a rich system that the iPhone was gaining new and wonderful features every week. Sure, these apps technically broke the rules of Apple’s user agreement, but unlike the SIM hack, it broke nothing on the device itself.

With the new firmware installed, it appears that all software must be “signed” by Apple or else it’s a no-go. So if I upgrade my iPhone’s firmware from 1.02 to 1.1.1, I’ll gain an app that lets me buy music directly from the iTunes store, but I’ll lose all the other apps I’ve installed over the past month.

But back to poor Lindsay iPhone. The iPhone — and’s Apple’s — reputations have taken a real hit, even though these issues don’t really affect the average iPhone consumer. As with the real Lindsay, it can all be fixed if Apple just learns how to communicate better.

There are reasons why the firmware update created so much havoc for so many phones, and it mostly isn’t the company’s fault. Why aren’t they explaining this clearly? And while ideally, I want to have full control of my hardware, all I truly need are beautiful, reliable tools that help me get through the day. If the best apps are only available signed, sealed, and delivered from the iTunes Store, fine. But when, kind sirs, will that be happening?

So here’s the public impression that Apple has created via its silence: the iPhone is a $399 phone that can be crippled via a software update and in some cases, if you take it in for warranty service, they won’t fix it. This expensive device can’t run any “real” apps that didn’t come pre-installed, and Apple has announced no plans to give the iPhone the same ability found in every Treo, Blackberry, and Nokia that costs half as much.

Please, Apple. Fix this before the court orders the iPhone to be fitted with an ankle bracelet or something.

I felt sort of an obligation to write this column. My iPhone review was pretty damned enthusiastic and the effects of the firmware update really influenced my thoughts on the device. I didn’t really care so much about what happens to phones that had been SIM-unlocked — like I said in the column, it’s inherently an unsafe hack and you’re foolish to try it if you don’t appreciate the risks — but zorching third-party apps with the new firmware update limits the potential of the iPhone.

The iPhone needs real, third-party apps. That’s really the distinction that separates a plain-Jane contract phone from a true smartphone.

And yes, Apple has opened the iPhone wide for developers of web-based iPhone apps. Seriously, if you can only associate the phrase “web-based app” with images of a JavaScript-based currency converter, then you desperately need to take a look at EditGrid. It’s the most impressive iPhone app I’ve seen. It might even be the most impressive handheld spreadsheet I’ve ever seen on any device: 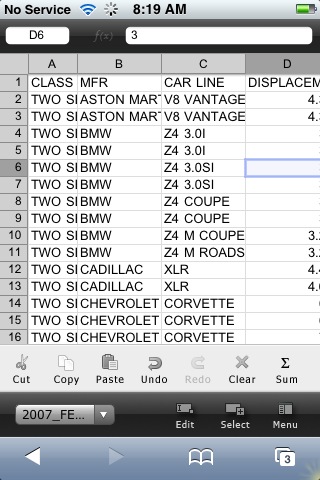 Yup, that’s technically a website you’re looking at. And yet it’s a full-featured spreadsheet app with tables, layers, charts, and everything. I use it all the time, both as a simply way to carry arbitrary desktop data around with me and as something of an outliner and list manager on my iPhone.

Cool. But when I board a plane, that spreadsheet goes bye-bye. Ditto for parking garages, the Amtrak station where I board the train to New York, and most of the state of Vermont, in my experience.

I insist that this is not a good thing.

Compare and contrast this state of affairs with the world that a Treo or Nokia or Blackberry owner knows. They can simply copy files directly onto their handsets. Hell, many models even have a card slot. Just copy files onto a memory card and then stick it in your phone, just like a thumb drive. And a cheap third-party spreadsheet app, word processor, list manager, et cetera ad infinitum will let you read and work with the file no matter where you go.

I really shouldn’t complain. Much of my new book (“iPhone: Fully Loaded”; bless youfor asking) deals with ways of getting around the “thou shalt not put your own damned files on this device” commandment imposed by Apple and iTunes. But statistically-speaking, a serious percentage of iPhone owners aren’t benefiting from book royalties so they’d probably prefer these sort of tasks to be so simple that you don’t need to buy a book at all.

(No matter how pornographically-low the price of said book might be.)

No, I still haven’t updated my iPhone to 1.11. This is what my iPhone’s home screen looks like: 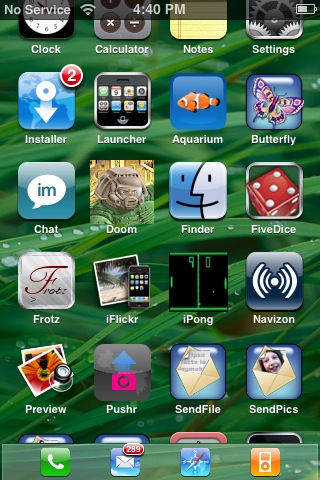 …I think you can appreciate that at this time, a firmware update would be a bit of a downgrade. Visit the homepage of AppTapp Installer for instructions on how to do this to your iPhone.

(Or, better yet…buy my book. Please. There’s a hole in the roof and the children need shoes and winter’s coming but screw all of that because I’m sick and tired of not owning an HDTV.)

As I suspected, the ongoing cat-and-mouse game between Apple and third party developers is indeed ongoing. The latest round has gone to the mice, with new tools for jailbreaking iPhones and even iPod Touches.

I’ll update my firmware after I’ve had a chance to digest these new techniques and understand how they work. All’s I can say is that one of the most important apps on my iPhone — following only the Big Four at the bottom of the Springboard screen — is indeed a simple book reader app that allows me to view documents I’ve copied into my iPhone’s storage. The phrase “cold dead hand” leaps to mind when asked to comment on my commitment to retaining this app.

But the real point of the column is that Apple has been doing a terrible job of addressing people’s concerns. Apple should have put Greg Joswiak or some other high-ranking, avuncular, and camera-ready employee in front of a sympathetic interviewer, and made the company’s side of the story plain.

And it’s unquestionably time for Apple to make its application strategy plain. Folks like me will be mollified by the knowledge that an SDK is definitely coming. Maybe not today, maybe not tomorrow, but someday, and then for the rest of our lives we can play Joust on our $400 phones (or hell, even have a to-do list).

For now, the question “Should I buy an iPhone?” has become a bit more complicated. I remain an enthusiastic user, but Apple needs to decide whether they’re building a mobile computing platform or an iPod. If it’s a platform, then the users should be able to count on a certain amount of control over the device.

If it’s an iPod, then the users should be warned that it is what it is and if it isn’t already what they want it to be, then they should buy something else.